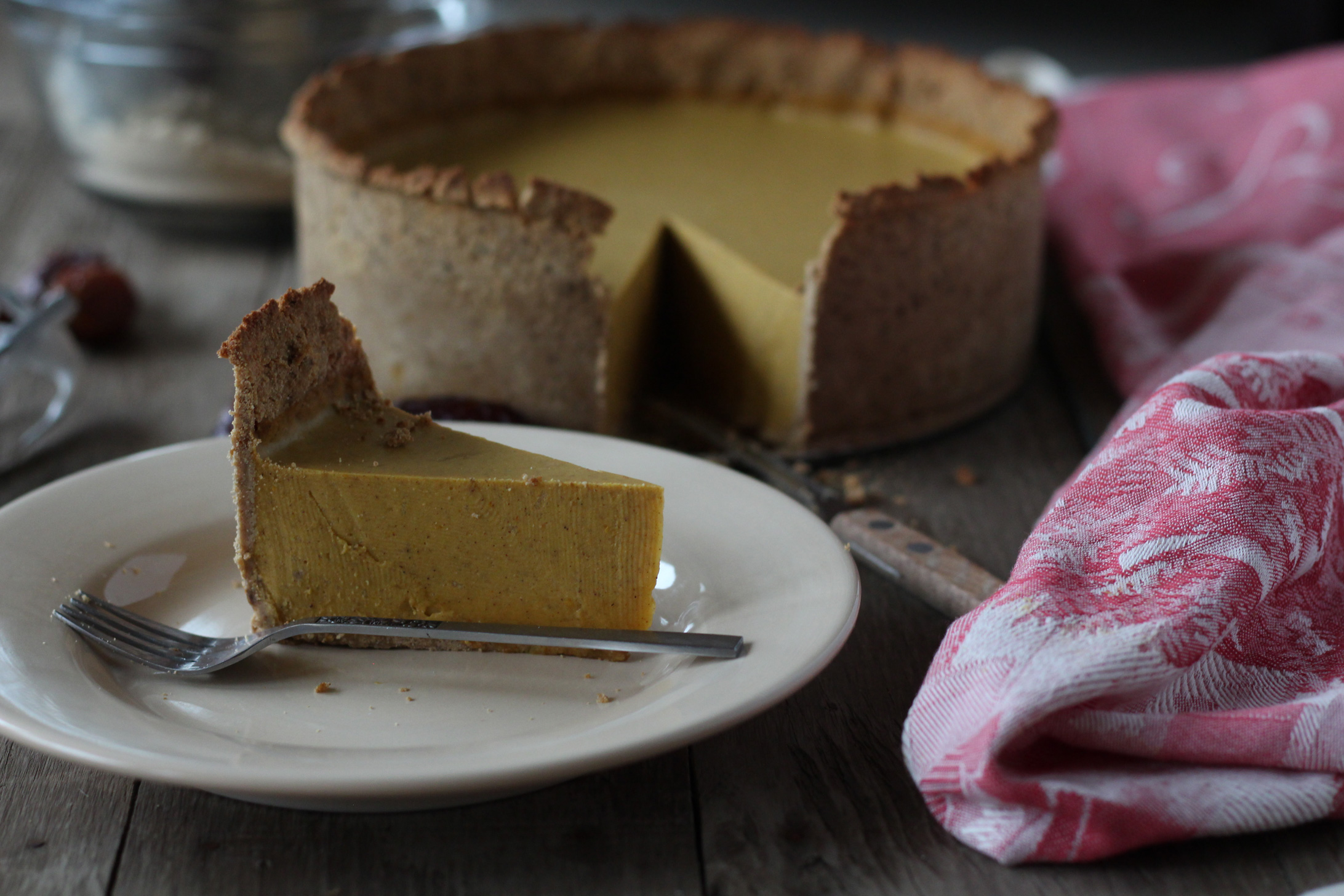 I wouldn’t lie to you when I say this is the best Paleo desert I have ever made. To me it’s reminiscent of the real deal baked good, with very little real baking! I first made this pie for Thanksgiving and it was utterly out of gluttony. I wanted to have a pumpkin pie because honestly I was the only one missing out. Other than my sister, everyone in my family fully enjoys their glutenous pies,  full of eggs and sugar of which I do not eat. So I set out on a mission to make something for myself so as not to miss out on the joy of eating a dessert during the Holidays. Last year, was a different story. I was eating full Paleo, which meant still eating eggs, almond flour, nutmeg, and most sweeteners. Basically, all the essentials for a pumpkin pie weren’t that difficult to come up with. I then too, was determined to have a dessert for the family gathering.

I remember telling my Grandma that I was going to make a Paleo pie, and it would be my first attempt. My Grandma now recalls on this occasion as “the pie from hell”. Literally, it was that bad. The crust was so difficult to work with. We tried rolling it out. We failed. We then tried flipping it off of the parchment paper on the pie pan. A crumbling disaster. Finally we resolved to pressing it in the pie pan and not caring what it looked like.The filling tasted great, considering I loaded it with coconut sugar and then topped it with pecans. But when I finally cut a piece, the crust was a just a nightmare. At that point it didn’t even matter if it tasted good. My Grandma and I spent 3 hours making that pie. And by the time I finished in the kitchen, it was 1:00 am Thanksgiving morning. I can’t say there’s been a more supportive person in my lifestyle change that doesn’t also follow gluten-free living. My Grandma always asks if you’ve eaten something, if you’re hungry and if so, can she cook you something? She always takes special care to make sure there is something for me to eat at every chance she gets. Which is not easy when you’re used to cooking traditionally southern meals. She constantly tells me how inspiring it is to her that I take care of my body. So naturally, when I brought up making another pie this year, she was supportive and wanted me to have something to enjoy. Then she asked me, “Oh please tell me, not the pie from hell?” HAH! I hesitated before I told her “No, but this pie has to be egg, nut, dairy, gluten, nightshade – free.” Her eyes widened a bit and she probably thought I was lying to her. And truth be told, I had no guarantees that this pie wouldn’t be the sequel, making it “the pie from hell 2”. I wanted the crust to have a true flaky texture and only a subtle sweetness while looking and tasting like graham cracker. I’m crazy, I know this already. It’s a tough feat but I am stubborn, so when I want something I do my darnedest to make it happen. At first I couldn’t figure out how to get the crust the exact texture I wanted, with a nice color.

The secret? Molasses. It seriously makes this crust what it is. Everyone who smelled it cooking asked if it was graham cracker, and then when they tasted it wanted to know if I put cinnamon in it. SCORE! Even my very non-gluten-free uncle who sends my Grandma dessert recipes on Facebook as a request for her to make, LOVED this pie! This is a serious victory if you ask me! The crust is not a roll out crust, nor is it quick to make. It does take attention, but it is not the pie from hell, halleluiah! It is simply a process. But isn’t that part of what makes pies loved? It is a labor of love and pies are to be enjoyed few times a year, so go on and enjoy the process because that’s all a part of the experience. Settlers who made pies were most likely trying to extend their winter squashes or whatever leftovers they had by combining it into a pie which would be much more filling to sustain them through harsh winters.  To say we’re pretty spoiled in the 21st century is a gross understatement.

Once you’ve assembled the pie crust though, the filling is easy all thanks to blenders!

What I love about this faux “cheesecake” pie is the texture is light as if the filling is almost whipped. It’s not overly filling or heavy like most pies are. Careful though, this may cause an overindulgence by consuming larger pieces than usual. I can’t tell you how relieving it is to me to have not only discovered this pie so I no longer have to suffer the memory of “the pie from hell”. And, I get to EAT it ALL. But thankfully, I’m pretty good at sharing so my family will be getting their fill this Christmas too.

Oh, and in case you wondered, my Grandma agrees – this pie is the BOMB!

1. Completely coat the spring foam pan with coconut oil. I use my hands to rub all the sides, and get where the two pieces meet around the bottom of the pan. Pre-heat the oven to 325 degrees.

2. In a bowl pour the coconut flour and either use a sifter or mix until there are no clumps. I have always seen better results if I sift. Then add the arrowroot powder and salt, mix until combined.

3. Then add vanilla and mix in molasses until mixture is crumbly. Then add in oil slowly, the mixture will begin to become liquid.

4. Lastly, stir in a little water at a time and the mixture will become more crust/dough like but a bit crumbly in large chunks.

5. At this point, use your hands to make sure the mixture is well incorporated.

6. Then take handfuls at a time and press the crust into the bottom of the pan and form into the sides. This will take a few minutes, but it’s so worth it! You may have about 1/2 cup of dough that you don’t use and that’s okay, freeze and save or crumble and bake for a crumbly topping.

7. Once the pan is fully covered put in the oven and bake for 20-25 minutes until it’s browned on the edges.

8. While the crust bakes, prepare the filling. Soak the dates in warm water for 5 minutes, remove the outside skin and blend on high until a smooth paste is formed. Add pumpkin, all spices, vanilla, and maple syrup to the blender. Blend until fully incorporated.

9. On the stove top add the two cans of coconut milk and gelatin into a sauce pot and stir to combine. Turn heat on low and continue stirring until mixture is completely warm but not hot.

10. Once the mixture is warm add it to the blender and mix on high until everything is combined.

11. Take the pie crust out of the oven once it’s done, and allow it to cool completely, all of the liquid should be baked out. Once it is cool, add the filing inside of the crust. Place in the fridge and allow to set for at least 5 hours, preferably overnight.

12. Before you serve let it come to room temperature and make your whip topping. I use Against All Grain’s recipe for this, because it’s so good and there’s no need to reinvent!