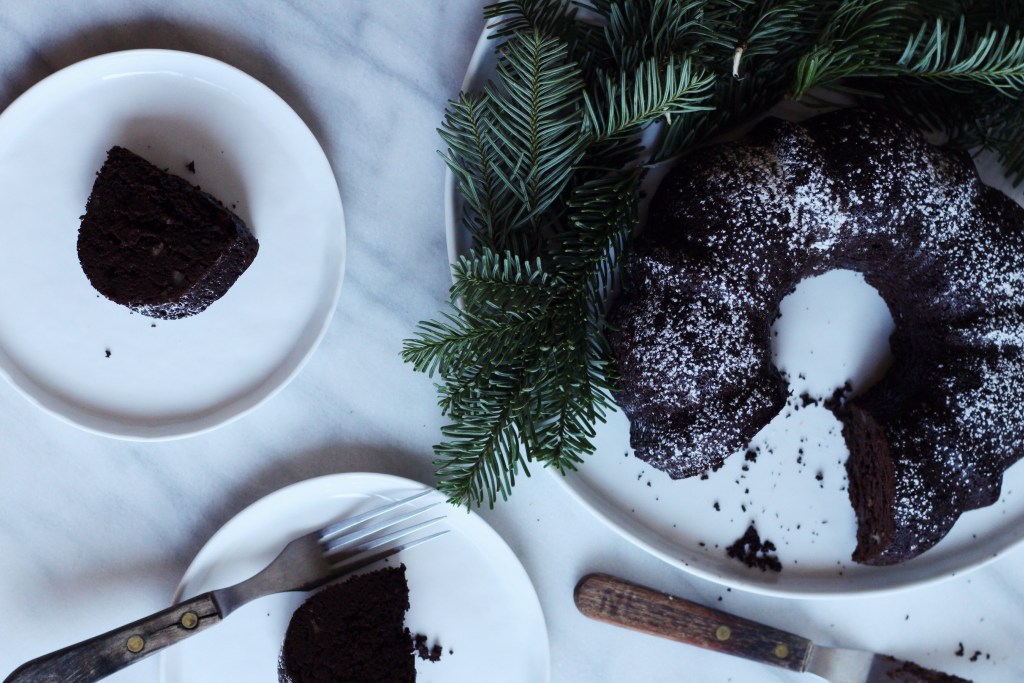 When I think about winter, I remember riding my bike in the snow, I think about glittering lights in the streets of Belgium, I see the warm mist of my breath in the air, I long for the holiday markets in Europe where clove and orange captivate the senses, and I think about Christmas Cake, which is all much more than a cake to begin with.

The years my family spent living in Belgium were undoubtedly some of the best years of our lives. Living there had a magical simplicity to it that made time feel as though it moved at a pace where if we tried hard enough, we could almost capture it like a firefly in a mason jar. Now, feeling as though it was forever ago, so much of me holds tight to my most sacred memories of that time.

One of those fond memories being the ever-famous Christmas Cake. Every Christmas in Belgium there are markets, bazaars and all kinds of shopping experiences to be had. Where my family lived on the international military base (SHAPE) we’d have a Christmas market of our own, the items brought from vendors all over and there was food brought from people who lived in the area, even friends of ours. Almost anything you could imagine was there and all of it purchased through raffles to raise money for the Church and sponsored organizations.

On one particular Christmas week my step-dad and I perused the Christmas bazaar together and happened upon, Christmas Cake. Both being horrendously huge fans of chocolate we decided it would be the dessert we’d bid on. We took home Christmas Cake that night and our lives were forever changed. It’s rich cocoa flavor is by far the most incredible of all cakes I’ve ever found, but the spices and texture combined make this cake a mind-blowing experience.

Fortunately for us, the recipe came with our prize and for every year after my step-dad and I would spend a few days before Christmas in the kitchen together making our cake. Then, come Christmas morning we’d have our cake (and eat it too 😉 hehe ) for breakfast with a bit of tea or coffee. It became a solid tradition in our household. I would go so far as to say it does not often feel like the holiday’s without the smell of Christmas Cake. Of course at this time in my life I wasn’t eating gluten or dairy-free so in trying to recreate this recipe there was a lot of debate on whether it was worth it. I am not one of those that really wants to recreate all the gluten-filled foods I used to eat, I’d rather just not have them because they are likely never going to compare to the real deal.

However, in this case, I decided there could definitely be a way to remove the gluten from Christmas Cake and have it still live up to it’s reputation. It’s not only gluten and dairy free, but it’s naturally sweetened, meaning there are no artificial sugars. The richness of the cocoa is expanded by the aromatic spices of clove, nutmeg and cinnamon.

The simplicity of this cake is really what makes the ingredients shine, it’s the reason it was never iced, nor topped with anything. Like fresh powdered snow it is purely bliss all on it’s own. ENJOY! & Merry Christmas Everyone 🙂 Share with me, do you have a tradition you love?