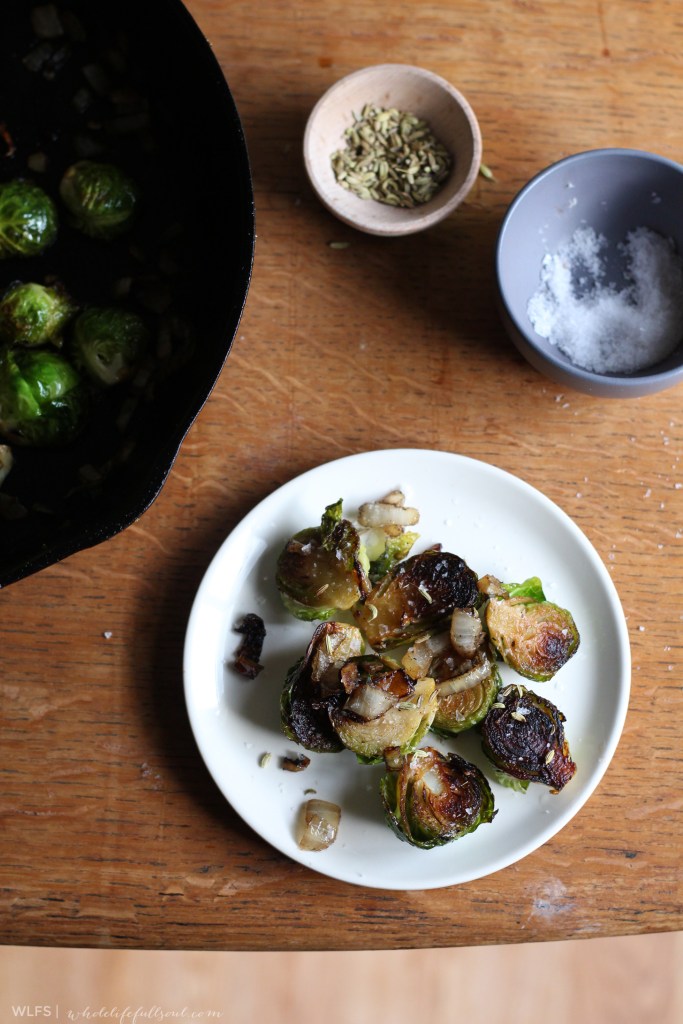 Let’s face it, Brussels sprouts are basically baby cabbage and ‘baby’ anything is cute, right? So naturally, you’d think more people would be all heart-eyes over Brussels sprouts, and I can tell you I am, though I haven’t always been.

I love cabbage, and always have. In fact my Grandpa and I have jokingly fought over my Grandma’s cabbage. But Brussels sprouts, not so much. I feel like they’re the younger sibling, totally left out of the fun and somehow they’ve gotten the bad rap of being “that vegetable” that no kid wants to go near. Nearly everyone has a story associated with why they don’t like them, and refuse to try them ever again.

I too have a horror story. Get ready to laugh your ass off.

When I was kid, my mom was a single parent for much of my life meaning that I spent a lot of time with a nanny, and we had several different ones as we moved almost every three years. Some were great, some not so great, two were the best thing that happened to us. One in particular was quite a rare breed, however. I remember distinctly her not paying much attention to us, and generally just not giving a flip what we did. That is, other than the time she made us eat boiled Brussels sprouts. YUCK, right? Well at the time I can tell you I was not a fan of the flavorless vegetable that I knew had a bad reputation. Not only that, but in our household if you tried something and didn’t like it, you didn’t have to eat it, as long as you tried. Apparently that didn’t apply under her command, and my sister and I were in fact to eat them. EW!

So what did I do in protest? I took one of the macaroni from our side dish (not cheese or anything a 5 year old would enjoy) and stuck it up my nose. YES, I sure did. I am one of those kids. I am not sure entirely what my logic was here, other than I did not want to eat this vegetable. Of course being as absent minded as she was, she had no clue what I’d done. A few days (yes days!) later my mom questioned me after finding it until she got to the bottom of my motivation, and then fired this nanny. Oh yeah, only to find out she had been stealing my mom’s jewelry. She was a gem, not! I can promise you, whatever horror childhood story you have these Brussels sprouts will be liking eating an entirely different vegetable. Actually, I kind of think they taste like popcorn, which is a whole other level of winning.

Brussels sprouts are loaded with sulfur just like other cabbage varieties. This compound is exactly what makes them gassy for some people as the sulfur compounds break down in the intestines. Too many will cause this, but just the right amount, if you tolerate them shouldn’t have this effect. In my healing journey it took me a while before I was able to start eating super sulfur containing vegetables for this reason.

Rich in vitamin C as well as anti-inflammatory compounds these tiny veggies are packed with nutrients. They are especially prevalent during the cooler months, and as we approach fall make the perfect cozy side dish. These Brussels sprouts will forever change your opinion of the lesser loved vegetable. I think from my story, its safe to say you can trust me on this one!