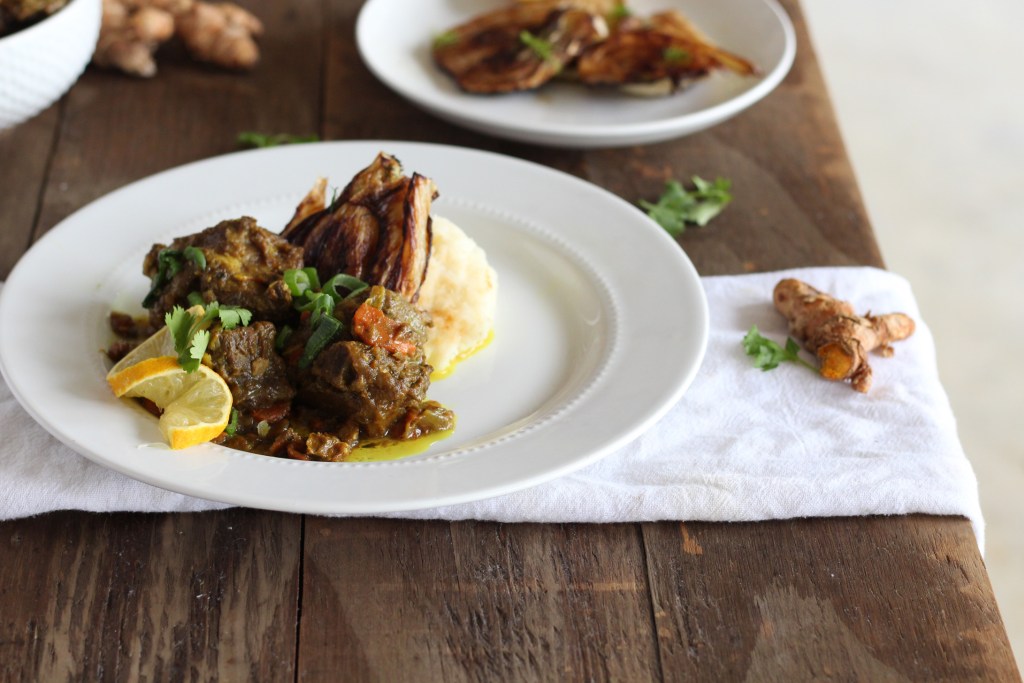 You know the feeling when you crave a specific type of food? It’s all consuming, the feeling of “I gotta have it RIGHT now,” sorta thing swarms you and suddenly you’re possessed by only wanting that one food or flavor. This was me recently.  Craving like a mad person some sort of spice, curry-like dish that reminds me of when I used to enjoy Indian, Thai and Moroccan flavors like nobodies business.

One of the key similarities in those foods is the spice, subtle in some cases but in most dishes it’s not. Unfortunately, I recently was accidentally exposed to nightshades while I was out of town, even after asking the waitress about what I was ordering. It was TERRIBLE, I became swollen and bloated instantly and my belly was NOT happy. Needless to say, I do not predict nightshades as a reintroduction any time in my foreseeable future. BUT that doesn’t mean I don’t still have cravings for the darn things. I mean, I’ve always loved spices and exotic flavors. So now I just have to be super creative in fulfilling those cravings, because if you’re wanting something listen to your body. Right? Let’s attack this head on. Inflammatory responses like the one I was having to nightshades happens a little like this; you eat something (nightshades for me) which your body views as a foreign invader, so your immune system is all pumped up like Sumo wrestler ready to attack pummel whatever is inside to harm you. Hence bloating, swelling, indigestion, the body is responding as it should to things that could cause potential harm, only in this case its hurting the body by causing chronic inflammation, arthritis and hosts of other symptoms depending on your autoimmune condition. Fight fire with fire. Okay not really, that always seemed like bad advice to me.

Instead, fight inflammation with turmeric. At least that’s my plan. Turmeric is FULL of health benefits, most importantly, anti-inflammatory properties making it hands-down one of, it not my favorite spice. I use it all the time, even if just a little bit, it somehow sneaks itself into just about everything I cook. Turmeric works as well as anti-inflammatory drugs in aiding in the chronic inflammatory response. WHAT? Yes, in fact I not only cook with both the dried spice and the fresh grown but I also take it in supplement form. A few years ago I was taking not only immunosuppressant drugs to help with the progression of my disease but because I still wasn’t managing my food lifestyle my pain relented. I was taking THREE different types of NSAID’s daily on top of the hard drugs. I was in serious pain.  After changing my lifestyle and removing the drugs one of the first supplements I started taking was turmeric, I can tell you that transitioning away from those drugs like Motrin, Mobic and Naproxen, turmeric helped me immensely in alleviating swelling and arthritic symptoms. The greatest part though may just be the amazing depth of flavor turmeric brings out in a dish. It adds a warmth that’s unlike most other spices and when paired with other anti-inflammatory spices like ginger and cinnamon it creates a powerful punch.

This meal was everything that I craved. I needed soothing relief from the attack of nightshades on my body and alternatively a complimenting spice that I was craving. Yes, I totally see the irony here! Sometimes when we follow certain food preferences it can feel limiting with the types of foods we eat and flavors we can create. I assure you with this dish you won’t lack anything. If you told someone that this Moroccan Lamb had no nightshades, they’d probably first ask, “What are those?” and when you explained they’d say “Oh,  I didn’t even miss them.” PROMISE!

*TIP*- don’t get rid of the bones from the stew meat, use them to make a broth. They will add so much flavor to your bone broth plus you’ll reap the added benefits of the extra turmeric. If you want to go a step further, add a small knob of turmeric to your broth as it cooks, this is what I did this week and have been sipping on it to help combat those nasty nightshades! These are good broth making guidelines to follow. Green onion and cilantro for garnish

1. Heat large pot over medium heat on the stove and add 1 tablespoon of cooking fat. Once it is heated add in the meat and brown on all sides.

2. Once meat is thoroughly browned add in all the spices, stirring to coat all parts of the meat. Chop up onion, carrots, garlic and remove the skin from the fresh turmeric and cut it into small cubes or slices. Add all of these ingredients to the pan and cook the vegetables until everything begins to turn barely translucent. Then add the apple cider vinegar, fish sauce and water to the pot. Stir to combine. Cover and allow to simmer on low for two hours, checking occasionally and stirring.

3. 15 minutes before everything is ready slice the fennel bulb into equal 1/2 inch thick pieces. Heat a skillet to medium and tablespoon solid cooking fat. Once heated place the fennel pieces in the skillet and cook on each side for roughly 7 minutes, or until a nice golden brown.

4. In the end the lamb should be perfectly tender, almost falling off the bone and the juices should have rendered to a nice paste. I recommend serving the fennel and Moroccan lamb with this cauli-turnip mash! Garnish with cilantro, green onion and lemon!

**alternatively you could cook the meat using a slow cooker set on low for 7-8 hours. Perfect for when you’re working all day!