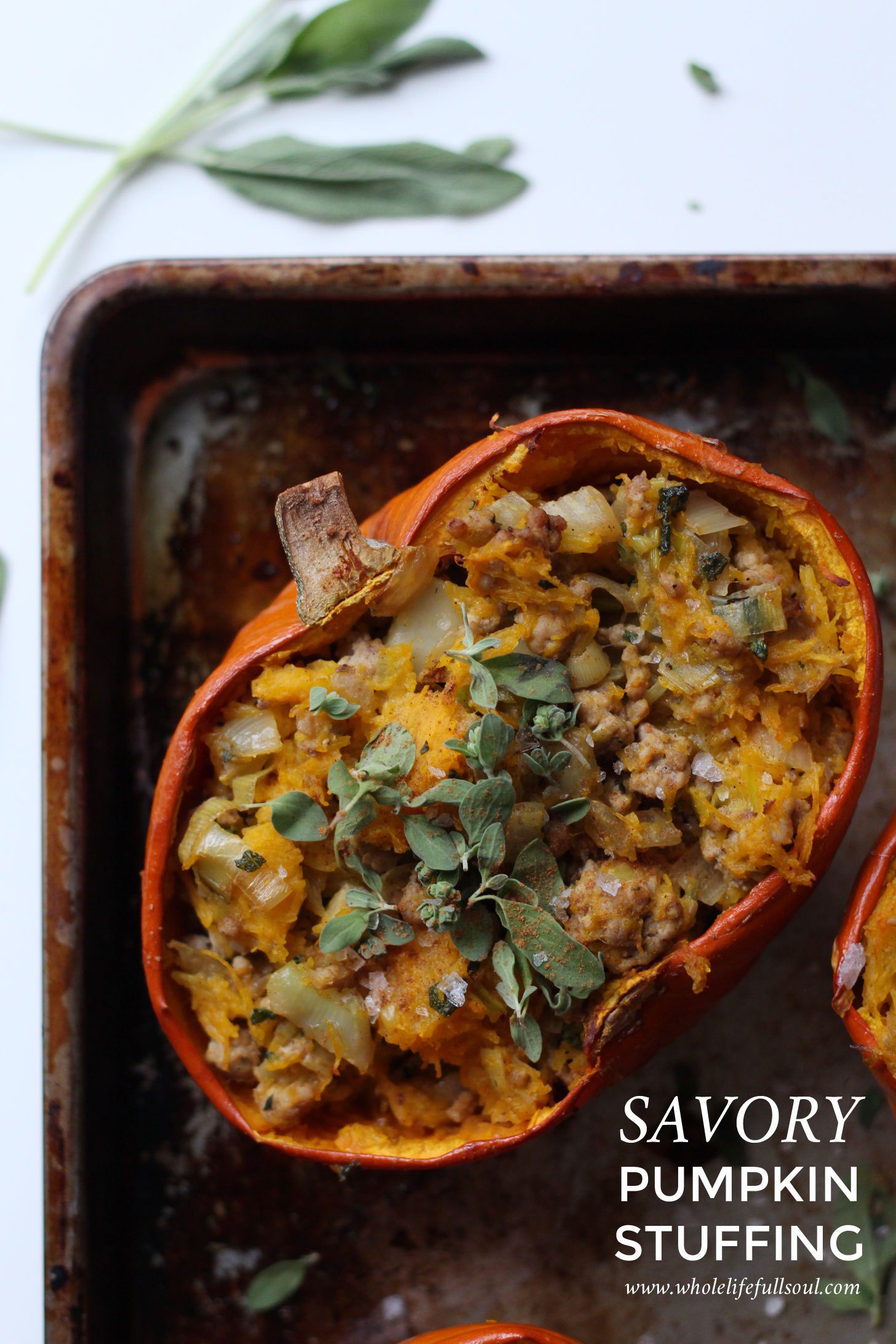 I love fall and winter for many reasons, partly the Holiday season, but if I’m being perfectly honest, it’s all the warming food that really does the body good. The foods of the season are things like winter squash, hearty herbs, root vegetables and savory meats.

These foods give us sustenance, keeping us fuller longer. But yes of course, there is an association with the Holidays that makes these meals all the more special. It means friends and family come together, more meals are shared and good conversation is had. This savory stuffed pumpkin stuffing is going to be the talk of the table, trust me. Simplistic is my style, but that doesn’t mean flavor is ever compromised. By roasting the pie pumpkins first and removing the filling from their flesh it creates a deeper depth of flavor in the squash. It’s interesting, that pumpkin is mostly considered when making sweet desserts, because in fact this type of squash is hardly sweet at all. It has much more of an earthy taste and dense texture.

Pumpkin is the perfect compliment to this stuffing because of it’s lack of sweetness. It has subtle notes that contrast the flavor of fresh herbs, onions and pork, but it doesn’t overwhelm the dish. It’s the best to me when I can combine a lot of different ingredients into one meal. This stuffing can be served baked into the pumpkin shells as individual or half servings, or it can be baked in a casserole dish to serve as a side for a large group of people. This would be my dish of choice to bring to a Friendsgiving! I personally, love Thanksgiving for more reasons than just the food that accompanies the day. It’s a day when we really take time to reflect on what we’re grateful for.

It’s powerful when you’re able to pause and be thankful for what you have in life, the bad, the good, the ugly, the beautiful. It’s made you who you are, which is the ultimate gift, to be thankful for you who are as an individual.

Oh and I’m also partial because it means watching the movie The Holiday Inn on repeat from here on out. If you’ve yet to watch, it’s a classic starring one of my main men, Bing and my other, Fred Astaire. Fun fact, the well-known song White Christmas was written for The Holiday Inn, with the movie A White Christmas coming out years later.  It’s quite literally my favorite Holiday movie, with Love Actually being a close second. I mean how could anyone NOT love that movie? This pumpkin stuffing may seem fancy, but the ingredients are simple, preparation easy but the meal itself is filling and flavorful! Happy Thanksgiving friends, I am so thankful to share my life, passion and food with you!