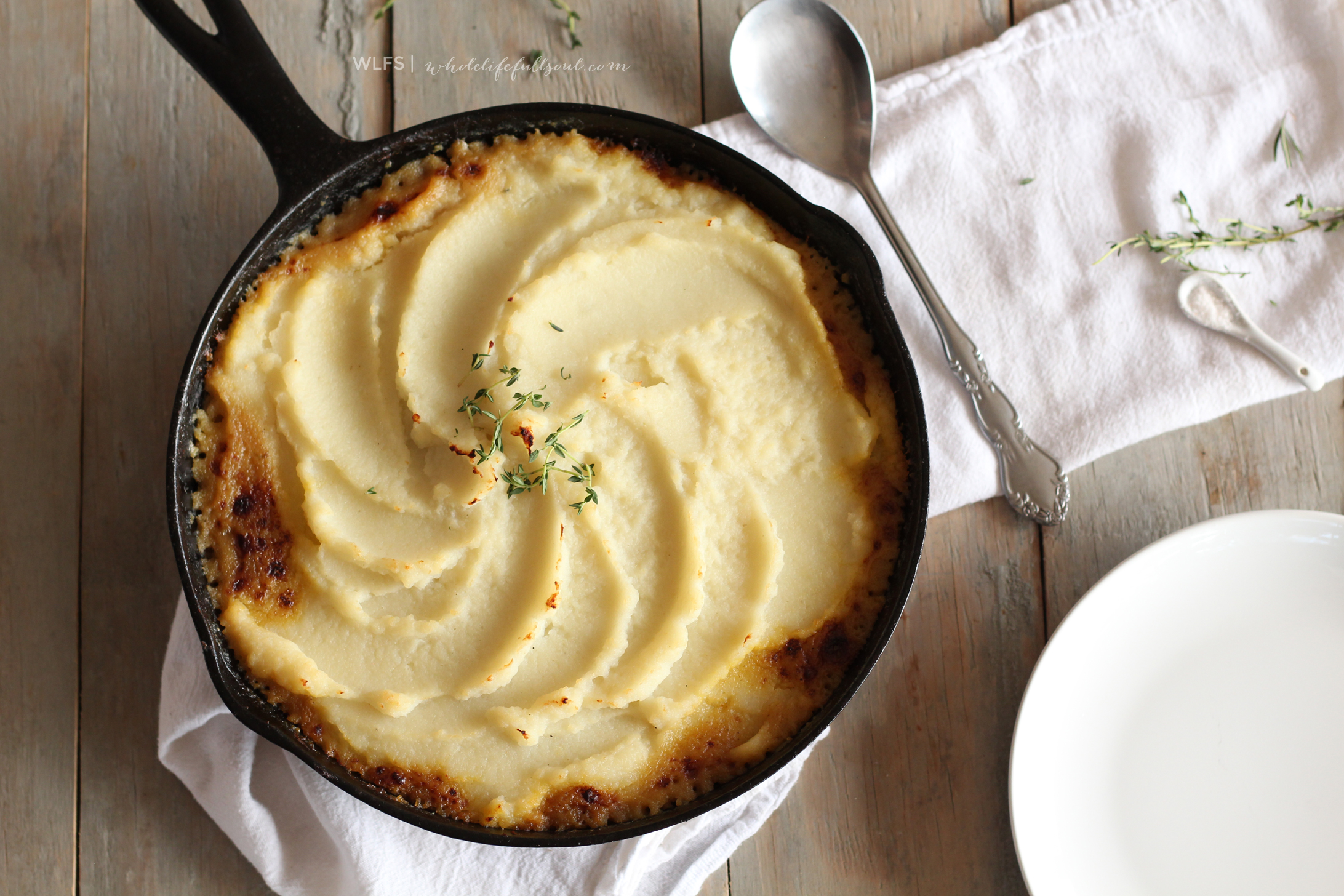 The transition from winter into spring is here and we’re all anxious to celebrate! I think hunkering down with one last crazy cozy meal is just the way!

I spent my weekend with a trip to the farmer’s market, some time in the sunshine but also a lot of time indoors, hunkering down working on projects and things I needed to get done. This meal was an easy one pan throw together that I knew would last me several meals. It’s warm spices take this comfort food to the next level, but truly the mash takes it over the top. Meat pies originated during the Middle Ages in England, Ireland and Scotland and it’s suspected that  many peasant women would have come up with the idea by wanting to use up any leftover meat. Traditionally they would have used pastry dough to top the pies and it wasn’t until later when potatoes were discovered in the new worlds that the cottage and shepherd’s pies became a popular. Little did they know then what a staple potatoes would be to their country’s cuisine.

With the autoimmune protocol, potatoes are on the NO list because they are in the nightshade family along with tomatoes, eggplants and peppers. These vegetables are known to disturb the gut lining and can often aggravate people with autoimmune conditions, causing flares and food intolerance.  In fact it’s only recently that potatoes have been welcomed back into the Paleo and Whole30 sphere overall as a safe starch. Even though the mash on top of this shepherd’s pie is not potatoes, you won’t be disappointed.

Since I limit my starch intake anyways, the absence of potatoes has not been entirely difficult for me, but its so much better since I have come up with a savory alternative. Turnip roots are full of vitamins and minerals along with loads of Vitamin C, a powerful anti-oxidant. They  have a very similar texture to potatoes when mashed, however, they are much lighter in texture. With a slight sweetness to them I even eat them raw and they have a similar bite as radishes do.  In this mash I use turnips and cauliflower to get the flavor and the consistency. I’ve found before when I made a mash solely with cauliflower I didn’t love the flavor. I like cauliflower, but I did not love the mash.

By blending them together the taste completely transforms into something different, and the texture is light and fluffy just as a mash should be. The best part are the bubbly edges that crisp up as the mash becomes caramelized. Since meat pies like this are known for being thrown together and truly a smorgasbord of ingredients I wanted to take care to pay homage in a way that highlighted and enhanced the flavors. With different types of meat, a plethora of vegetables this pie is not just leftovers and scraps. I love these types of meals for feeding a bunch of people. This could easily feed 8-10 people for a St. Patrick’s Day or Easter Celebration. Everyone will want to be the first to dig in! 1. First prep all the vegetables. Peel and chop carrots, finely dice the onion, and chop the fennel and celery. Peel and cube the turnips and cut the cauliflower into florets and set them aside for later.

2. In a cast iron skillet (or skillet of choice) brown the onions on medium heat, once translucent add the carrots, fennel and celery. Cover and cook for about 8 minutes until the vegetables are all tender. Then remove the vegetables into a bowl and separate 1/2 cup for later use.

3. Add the meat to the skillet, all the spices and the apple cider vinegar to and begin to brown.

4. While the meat browns work on the mash. Fill a pot with about 1 inch water and place a steamer basket inside, then place the turnips and cauliflower on top of the basket. Cover the pot and steam on high for 20 minutes.

5. While the meat browns and the mash is cooking, take the 1/2 cup separated vegetables and add to a blender with the bone broth. ( I use a small single serving blender for this task, but a regular one will work as well). Once the meat has finished browning stir in the veggie puree and then add the rest of the vegetable back into the skillet and let it simmer on low while you finish the mash.

6. Once the turnips and cauliflower are done transfer them to a blender. Add the fat of your choice and salt and blend on high until desired consistency. (I like mine somewhere between smooth and chunky!)

8. Bake at 350 degrees for 20 minutes, then turn on the broiler for 3 minutes to get mash golden brown. Make sure to watch it with the broiler, all ovens are different and there’s nothing worse than burnt pie!

Warning: Invalid argument supplied for foreach() in /home/customer/www/kariowens.com/public_html/wp-content/plugins/feed-them-social/feeds/facebook/class-fts-facebook-feed.php on line 1811