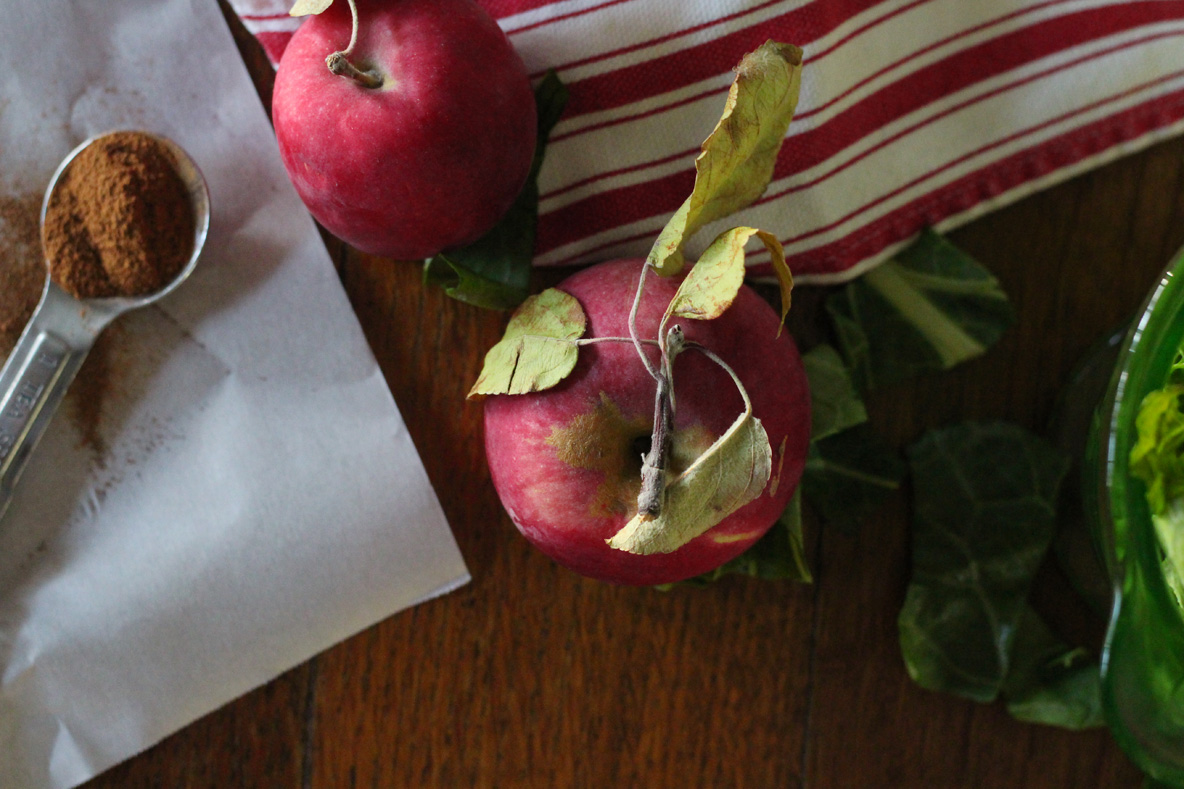 I crawled out of the bed one morning and headed up the stairs from the basement into the kitchen where cinnamon overloaded the air. It smelled so strong as if someone had lit cinnamon sticks on fire mistaking them for incense.

I had been at my retreat in Vermont for two nights and had been missing a bit of my normal eating routine. And there, on the bar was one of the most beautiful sights.

Amongst the gluten free oatmeal, the leftover homemade bread transformed into French toast, the fresh maple syrup and the oodles of nuts, raisins, and other toppings there was a large bowl full of KALE.

I had been craving greens up to this point you have NO idea. I eat them pretty much everyday if not multiple times a day. The kale was wilted and sautéed with fresh Vermont apples. It was the first time I had eaten apples in two months since starting my Autoimmune Protocol journey without any fruit. I could tell they were fresh because they had a sweet flavor and a tart acidity that contrasted so well with greens.

That morning I stuffed myself with kale and apples and I loved every minute of it. Once my retreat ended I met up with a friend of mine and spent a few days with her exploring around Burlington. It was then, after my initial experience with Vermont apples that we collectively decided we had no choice but to go apple picking. So we did. Shelburne Orchards is only fifteen minutes outside of Burlington. The day was perfect for our excursion, bright and sunny for us to see all the colors of the leaves and the mountains in the distance. With many varieties of apples to choose from  like Liberty, McIntosh, Gala, Fiji and many more, it was hard to choose which ones to pick. We decided on the Liberty, McIntosh and Gala since they were all planted near each other giving us the opportunity to frolic the trees as we wanted. I had never been apple picking, believe it or not. I’ve picked blackberries, strawberries, raspberries, peaches, and many other summer fruits but it is was quite another experience picking apples. Most of the ones I had my eyes on were up fairly high.

I mean how do you get to the ones that are SO high in the tree? Well, my friend was pretty good at that but we finally found the apple pole pickers (mouthful) which I didn’t even know were a thing. They helped a ton. Or we just found some more accessible ones without all the effort, like these pretties. So naturally I had to then haul the bushel I picked, okay it definitely wasn’t that many, back to Florida so I could recreate the wonderful dish I had while on my retreat. Reminiscing is fun, but it’s better when it’s in the form of food. So for your sake, because you’ll want to eat this (trust me!) I have recreated the dish with my favorite greens to make it a bit different. Enjoy this for any fall meal, breakfast, lunch, brunch, dinner, or brinner (breakfast for dinner). The possibilities are endless! 2 medium size apples (if large use one)

1. Heat fat in skillet ( I like cast iron) over medium/low heat.

2. Slice apples thinly cutting away from the core.

3. Once pan is heated and begins to sizzle add your pre-washed and chopped greens.

4. Keeping your temperature low, saute and coat the greens in the oil tossing them gently in the pan.

5. Turn heat to medium, cover the pan and let simmer for 10 minutes or until tender.

6. Meanwhile combine ACV (apple cider vinegar), cinnamon and salt in a bowl. Then add your sliced apples and coat them in with the mixture.

7. Once the greens become tender add the apples to the skillet and toss them around with the greens. Turn the heat to low and cover to let simmer for another 5-7 minutes.

8. Turn off the heat and serve when apples are just tender.