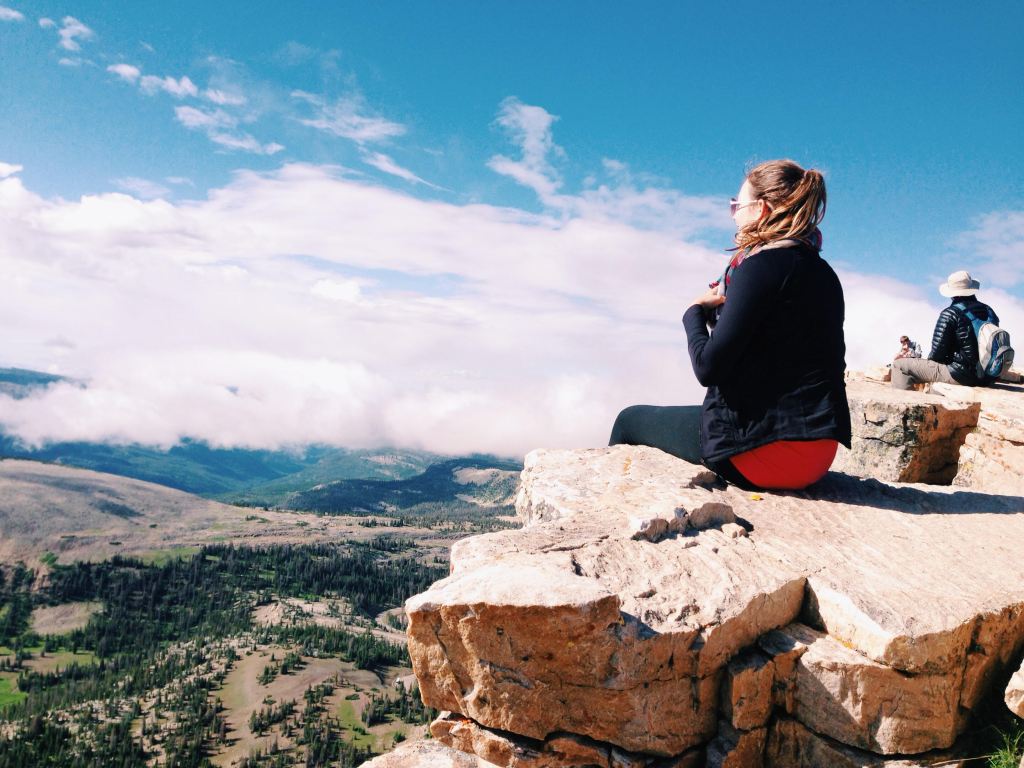 In 2005 before I started having severe arthritic symptoms, before my fingers became stiff and my knees too weak to walk, before any diagnosis, the world was at my feet. I had the freedom of movement. I enjoyed it largely as an active teenager running around full of energy and an active member of the volleyball team. When disease struck the confines of my bed were mostly what I spent the next months surrounded by. I felt robbed of my independence, of my will and desire to move. I felt I could just lay there and die and it wouldn’t matter.

One day, laying in my mom’s bed tucked under her arm I asked her, “Why me? Why did this have to happen to me?” I had tears in my eyes, as it seemed I never stopped crying from the loss of my mobility, there were many tears shed. She looked back at me and said, “I don’t know why, but I believe one day you will.”

At the time I called bullshit. I didn’t care if one day I knew why or not, what I was really asking is “will I ever be able to move again?” because at the time that is what I cared about. It wasn’t until time passed though that I began to realize what this drastic change in my ability to move was doing for me. It was carving out a different way a life, a new forged independence that runs much deeper than mechanics of my human body.

I began turning inward. I learned the hard way what it meant to have true friends and I harnessed resilience at a formidable age. I figured out what was important to me quickly, and I went for it. I knew from first hand experience that everything in life is temporary, be it the passing of a sunset, physical mobility or eyesight. These things are constantly shifting, changing, and gone within seconds. I learned that in order to live a life I wanted I needed to go for things. This was my spiritual independence. That’s not to say that I learned this all quickly, and let me also preface that much of this is in retrospect years later. The groundwork was being laid for the foundation of my core.

Even after I began biological medication treatment for what was diagnosed as Ankylosing Spondylitis and I began to feel better, there was a voice in my head whispering “you can’t play volleyball, you shouldn’t do conditioning, you’re not going to run again, your days of exploring are over.”

I spent years  battling this voice, actively ignoring and proving it wrong. But I am human, and humans have a delicate weakness to us all that make us as spiritual beings intrinsically special. It separates us from other animals and living creatures. My weakness overcame me and those voices became my steadfast beliefs. I no longer played volleyball, I no longer ran, I no longer did physical conditioning, I still explored but it was with both exacerbated effort and consequences.

When we begin to believe these inner gremlins it becomes our truth. I told myself I couldn’t do things and so I didn’t do them. It’s not even like I tried to do them and couldn’t, eventually something shifted and I decided that I wasn’t capable any more. I couldn’t have been more wrong.

As I started focusing more on my lifestyle over the past few years I began to realize what I had done to myself (read: not what had happened to me) I started actively participating in conversations with myself. This was no longer going to be a passive relationship but one with love, admiration and encouragement. I started doing physical activity again, first with yoga and the change in my eating habits helped ease the symptoms I was experiencing along with the release of muscle tension. Things began shifting.

I tried hiking, and fell in love. I became addicted to the feeling of the fresh air at the top of a mountain, to the adrenaline rushing through my blood. I knew that things were never going to look the same for me again because my self-perspective was making a 360 degree turn.

Hiking for me, symbolizes the epitome of both my able body and my spiritual independence. It sets free my soul by pushing me on a cellular level, reminding me that I am made of feeling not only of joints, ligaments and tissues.

When I signed up to attend the No Barriers Summit  in Park City, Utah I knew it would be life changing. I’ve done years of work in the disability advocacy setting and knew enough about previous conferences to be ready for life altering work to occur.

I hiked up Bald Mountain in Utah not because I felt like it was going to be a challenge, which at nearly 12,000 feet of elevation and rock scaling it is, let me tell you, but because of the fear of not feeling able to do.

Hiking up the mountain I realized a bit about those beliefs I had once told myself. They were all fear based. Fear of what? I’m not entirely sure, maybe of not having the identity of a disease anymore, or perhaps it’s something else altogether. Perhaps fear is there to protect you, to keep you from going too far outside your own boundaries and letting you err on the side of caution in situations where you’re in danger. Fear is a good thing in fact, if you know how to work with it. Fear can be a catalyst for motivation or it can be an inhibitor. I choose to no longer let it be crippling. Instead I am spiritually willing.

It’s hard to breathe hiking up a mountain in general, but the altitude change is unlike anything I’ve ever experienced. As your lungs begin to expand it feels entirely the opposite, they are constricting so hard that your ribs feel as though they’re bearing down trying to crush them. The barometric pressure of the air decreases and making it “thinner” as people like to say. I started to feel like I was going to throw up. Next came the metallic taste in my mouth as if I were sucking on pennies. Your blood is pumping so fiercely throughout your body as it tries to acclimate to the altitude creating this iron flavor in my mouth.

Nearing the top of the mountain I began adjusting and the harsh reactions weaned. All I could focus on was “inhale, exhale, do it again… inhale, exhale.” Fear could not exist here, self-limiting beliefs had no occupied space in my mind, there was only my essence, my breath, my body and the mountain.

I was free. Free from fear, free from barriers, from self-limitations, from judgment and expectations. I could just breathe. And while you only spend but moments on a summit, you’ve experienced something not only physically in your body, and perhaps visually with your eyes, but spiritually inside of you.

The top of a mountain is the majestic exhalation of the journey of growth it took to get there.

You are enlightened by the experience and through that are destined to share it with others when you come down. And yes, you must come back down, if for nothing else to share your experiential knowledge with those who have yet come upon their strength to summit. What’s within you is stronger than what’s in your way and so often, as in my case we’re the only one’s in our own way.

11 thoughts on “The Self-Limiting Summit”

Warning: Invalid argument supplied for foreach() in /home/customer/www/kariowens.com/public_html/wp-content/plugins/feed-them-social/feeds/facebook/class-fts-facebook-feed.php on line 1811